About time I got my slime on with Dragon Quest Monsters: Joker 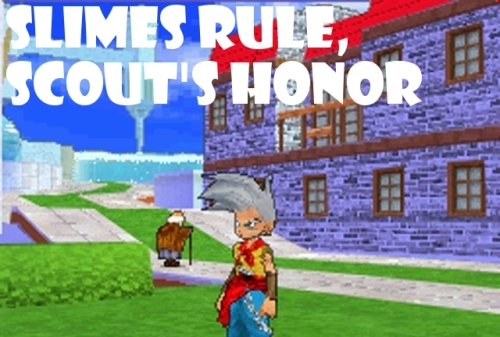 I finally got to play a bit of Dragon Quest Monsters: Joker last night despite purchasing the game a couple weeks ago. That seems to happen a lot with Nintendo DS titles for me. I buy them…and then don’t play them for a bit. I think it’s because I’m less excited to play my portable gaming device when in my own home, as I consider it more of a traveling thing, a road-side companion, a portal that helps pass time. Also, DQM: J was an impulse buy, something I picked up while waiting for Bullet to get an oil change; it’s not like I’ve been dying to try it out, just figured it would be interesting to see how it compared against its forefather, the mighty Pokémon franchise.

From what I’ve seen so far, there’s more visible depth in DQM: J than, say, Pokémon White. The key word is visible. We’ve all heard about the crazy amount of stats and breeding spreadsheets and EV madness and so on for those pocket monsters, but a good majority of that is behind the curtain. You have to go online and read. For DQM: J, it’s all right there. Stats, weapons, learning abilities, and what’s next for your mischievous mole or platypunk. There’s even a monster synthesis option, allowing you to fuse two monsters together in hopes of creating a better fighter. I like that, even if there’s not much I can do yet with my two-monster team. Hopefully things really open up after Infant Isle, and I can focus on grinding my team into something truly monstrous.

Also, while I love the classic sounds and elements from many of the Dragon Quest games…do they constantly need to get reused over and over? Dragon Quest Heroes: Rocket Slime, Dragon Quest IX, Dragon Quest Wars, this –they all sound exactly the same. Granted, catchy tunes and soundbits, but not after the eightieth time. Save for the level up tune. That one always warms my cockles.

Anyways, I took notes of my first half-hour playing DQM: J. You’ll be able to read what kind of crazy adventures I got into with our young monster trainer Hodor over at The First Hour. Um , soonish. Just gotta, uh, type up my hand-written notes–scribbles, truly–and clean up the review. Not to get too spoilery, but the last two minutes are basically me channeling Darth Vader. Yup. Until then, goo luck scouting those slimes!