Hense, the Goddess of Pain and Pleasure, loves this blog post about Bastion’s difficulty 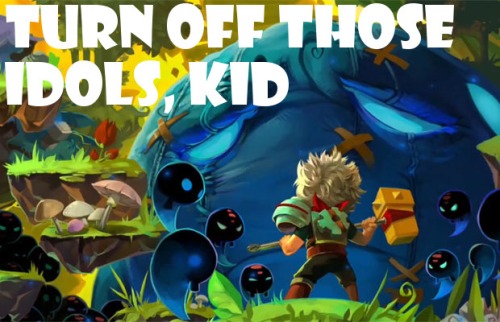 Suddenly, the Kid died three times in a row, unable to stop the swarm of Squirts and Gasfellas from overwhelming him with their lethal attacks. Up until that point, the Kid had never fallen in battle; sure, he’d come close, exiting the battlefield just barely, chugging his last bottle of health potion, wiping the sweat from his brow, quietly ignoring the narrator’s snide commentary. So, what had changed? Did the Bastion developers decide to ramp up the game’s difficulty without rhyme or reason?

Nope. What happened was that I built a shrine at the Bastion and turned on all of the god-like idols, thinking they were there to help and bestow great benefits on the Kid. Actually, they do the opposite of that. They make the game a whole heap-load harder, rewarding the Kid with more XP, but chances are that XP won’t be gained due to the fact that these enemies are now faster, stronger, and more deadly. Some even drop exploding bombs upon death, one last eff you before the darkness takes them. Because Bastion suffers from the tiny text disease, I couldn’t read the flavor text that went with turning on each idol and decided that surely they existed to help us on our journey to rebuild the Bastion. The idols also stack, meaning you could turn on a dozen and really wish your thumbs never existed. I believe I had turned on Acobi, Pyth, and one other idol before heading out to find Shards. Eep.

So, to help me and my bad eyesight out in future adventuring, here’s a table of all the idols you can unlock at the Bastion’s shrine, as well as what they do to ramp up the game’s difficulty:

Yeah, imagine all of those idols turned on at the same time. Can’t even stomach it. Thank goodness there’s no Achievement tied to utilizing these idols or anything; they are just there if you, the player, really want a different experience. I think I’m content with the default difficulty for now and will not be going back to the shrine any time soon.

Hard to say how far along in Bastion I am, but I’d wager either halfway done or a little more than halfway done. I’ve been using the machete and the scrap musket religiously, and haven’t really done much with secret skills. I constantly forget that I have a third attack. Oh well. Here’s to remembering things and reading important text then!

3 responses to “Hense, the Goddess of Pain and Pleasure, loves this blog post about Bastion’s difficulty”