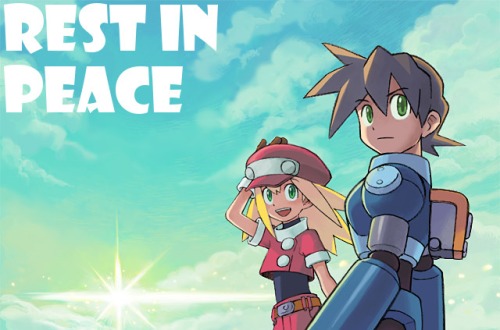 As I was inching closer and closer to completing George R.R. Martin’s A Dance With Dragons last night, I took a small break between powerful chapters to see how the Internet was holding up. Maybe I shouldn’t have as I already knew that the night was gonna get sad and frustrating once I closed the latest ASoIaF tome for good, but the Internet exists for checking, and checked it I certainly did. Scrolling through my Google Reader feeds, a headline popped out at me, and I read on, grimacing, trying to fathom the what and why: Capcom had announced that they were canceling Mega Man Legends 3, citing that certain criteria had not been met to push the project forward into full production. See Capcom community liaison Greg Moore’s words right here:

“Part of [the game development] process includes an assessment of whether the title will go into full production, and is based on a number of criteria with input from different sectors of the company. Unfortunately it was not felt that the Mega Man Legends 3 Project met the required criteria.”

There’s not much on the horizon that has looked appealing enough to warrant more use of my Nintendo 3DS, but Mega Man Legends 3 (and its Prototype Version demo thingy) were definite contenders for my gaming hands and eyes. I still swear I have a copy of the original PlayStation Mega Man Legends somewhere around my apartment, but have not gone looking for it yet; it’s a game that was different enough to be a Mega Man title and more. I liked it for how hard it tried to not be the same ol’ same ol’, and while I never got to play any more titles in the series after that I knew that I’d pick up MML3 and its demo on day one. A portable MML is enough to get me smiling. I was definitely bummed to learn that the Prototype Version wasn’t going to be available when the eShop opened, and I should’ve seen through that thin veil, that Capcom was out for revenge against Keiji Inafune, that they’d rather push less exciting franchises forward than give a series that, without a doubt, has its fans, has personality, has a thousand and five stories yet to be told.

I have to wonder what criteria wasn’t met. More than likely, we’ll never know. Farewell, Mega Man Legends 3. May your health gauge refill sooner than later.

2 responses to “Sadly, Mega Man Legends 3 has been cancelled”