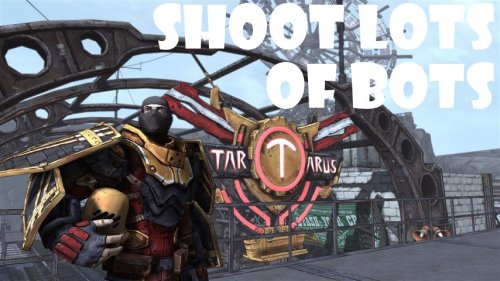 Okay, time to be honest. Not that I’ve never not been honest with y’all, but it’s a good, catchy phrase to start a post, and I guess the honest part here stems from the fact that I feel very guilty about not remembering very much about the last DLC for Borderlands, the one all about Claptraps, the one awesomely titled Claptrap’s New Robot Revolution. I do remember that I had to collect a boatload of Claptrap parts, which was not very fun, and then after that it gets fuzzy. Think there were some boss fights with bosses I had already defeated in the main game, but this time they were Claptrapped, but not any harder or different from their true, former selfs. At the end, I took down a giant Claptrap that spawned an endless army of Claptraps with a few shots from my always helpful turret, a couple grenades, and a tiny pistol that sent shocking bolts of electricity from bot to bot to bot. Credits rolled.

That’s kind of it. It’s mostly one large fetch quest, and then several crawls across the map to fight a boss you already once fought.

The add-on’s biggest re-playability comes in the form of its Achievements, many of which I will not unlock for many, many months. Several are based on collecting special dropped loot from Claptraps, and while there are plenty of chattering robots to shoot, the drop rate of panties, 3D glasses, pizza slices, oil cans, bobbleheads, and fish in bags is amazingly low. Like, staggeringly low. I once spent half an hour and shot up over 50+ Claptraps to only earn a single pair of 3D glasses, and at that point, I had already unlocked It’s so realistic!, the Achievement for getting five 3D glasses. I’ve gone back several times to see if I can inch closer to collecting all these bizarre items, and each time it’s only one or two of the desired loot, more often than not stupid 3D glasses, of which I NEED NO MORE. So that’s annoying.

I guess if there’s anything to be remembered about Claptrap’s New Robot Revolution is that it’s…annoying. Bring it on, Borderlands 2!