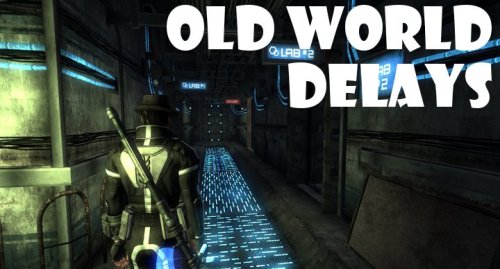 Notice that I didn’t say “scheduled for release” or “dropping on” or anything official or fun like that. That’s because, when all crime scene components are scrutinized and reviewed, when the coroner is done determining the cause of death, this is actually a delay, not an official release date. See, we were told some months back that a rush of Fallout: New Vegas would be hitting us after the lengthy quiet period from Dead Money until Honest Hearts. That last DLC add-on came out in May on time, and the next two–Old World Blues and Lonesome Road–were lined up to follow in June and July, respectively. Bing, bang, boom–one after the other after the other. As an admitted Fallout junkie, this sounded heavenly to me.

Part of the delay of Old World Blues is to make room for yet another patch to fix further problems in the game. That’s good and all, but now I have to wait until the middle of July or so to explore new content when, all along, I’ve been getting ready for such adventuring since the beginning of June.

Not gonna hide it, but I’m pretty bummed about this. I’m going on vacation next week, and it’s the sort of vacation where one just lounges around, drinking peach-flavored sangria and playing games and enjoying the peace and stillness, the walks to WaWa, the carpet beneath bare feet. I was hoping to purchase this beforehand and then spend some time kicking back in the Big Empty. Guess not. And it looks like Bastion also comes out right when I return from vacation. What a shame. Don’t gaming developers know my schedule and plan accordingly?!

Looks like I should try to save some L.A. Noire for vacation time then. One million bottle caps says that Lonesome Road doesn’t come out in July; more likely in October to help celebrate one year of the most unpolished game ever. I still like it though, but yeah…