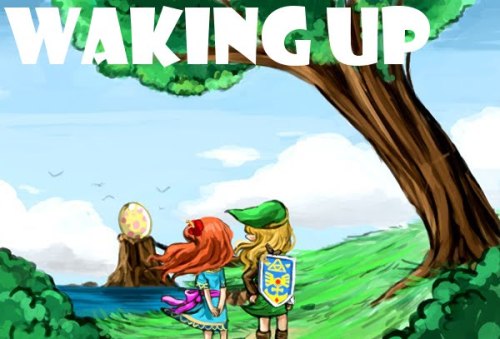 Hey! That Ocarina of Time game is being released again for like the seventh time today, now gracing the Nintendo 3DS with its legendariness and N64 graphics. I’m still unsure if I even care enough to want to check it out; more than likely, my second Big Name retail purchase for the 3DS is gonna be the next Animal Crossing title. Which, evidently, lets your character dress up like Link. Life’s a funny thing.

But another Zelda game was re-released in the last week or so, and that one I’ve actually played a bit. It’s called The Legend of Zelda: Link’s Awakening, and I covered the game’s first 30 minutes for The First Hour. CLICK THIS SENTENCE TO READ ABOUT ME FAILING TO REALIZE I COULD MOVE SEA URCHINS OUT OF THE WAY WITH THE SHIELD.

That was posted a few days ago, but I forgot to link to it. My bad. Yeah, Link’s Awakening is a lot of fun. Easy to pick up, easy to put down for a little break. The music, my gods…the music. I’ve progressed a little further too; now I’m trying to collect enough golden leaves to appease some dude who–I’m assuming–will help Link on his journey to make the world’s largest omelette. I’ve gotten four down, but still need one more. Hopefully I won’t have to resort to using a walkthrough, but the overworld map is pretty big, and Link–a.k.a. me–can get lost fairly quickly.

This Nintendo 3DS minigame actually required a good amount of time and attention, and so it’s making the list as a completed title for 2011. DLC and minigames, huh? At this rate, I’m going to start considering things like “waking up” and “eating a yummy lunch” to be completed games, and before you know it we’ll be in the triple digits. Looking forward to that, as well as hitting twenty-five completed titles as I can then buy L.A. Noire guilt-free, and the timing on that is most likely going to perfectly align with an upcoming vacation. Mmm…

Anyways, Find Mii. It’s one of two minigames found within the StreetPass Mii Plaza, and it’s basically a tiny, simple RPG with a small level of strategy to it. Your Mii–the version that looks like you and that you send out to other 3DS systems to hang out, that is–is captured by a mysterious monster and locked in a cage. To free him or her, you’ll need to either hire cat/dog heroes (depending on your preferences) or tag other 3DS punks and use their Miis to fight off ghosts, open treasure chests, and progress through a multi-room dungeon. A basic RPG, wherein the color of the Miis and heroes you use determines their magic ability; some spells work better on specific ghosts, and there’s one dungeon room that simply won’t let you do anything unless you have somebody in a white shirt.

Strategy involves knowing how to attack ghosts in a certain order or with a specific spell up front. Let me say that Poison (purple shirts) and Invigorate (orange shirts) are great and should be used first to get the most out of them. Sometimes a ghost will have a colored shield, and the only way to break through is to attack with a same colored hero; sounds easy enough, but the heroes you purchase are random, and who can ever predict what color shirt another 3DS owner’s Mii will be wearing. It’s a lot of luck first, strategy second.

For the longest time, I was spending Play Coins to hire a few kitty cats to fight for me, which meant very slow progress. It wasn’t until MoCCA 2011 that I started to tag people like crazy and was able to get through a huge chunk of the dungeon; the final end boss, however, required constant hero-purchasing, but eventually I was successful in saving, uh, myself, and then there was some end credits and the option to play again to find even more hats for my Mii to wear. I wish I had saved my final end-game stats, but alas, nope. I’d guesstimate that I used somewhere around 150+ heroes to beat Find Mii for the first time.

Here’s a checklist of the hats I’ve unlocked so far:

Of all of ’em, I enjoy the crown, mostly because I got used to seeing my Mii wearing it while stuck inside a cramped cage. See:

For being free, Find Mii a fine little distraction, something to do every now and then when you notice you have a tag or abundance of Play Coins, but once all the hats are collected, that’ll be it. Maybe via system updates, Nintendo can include new dungeons (and hats!), as well as new puzzles to collect pieces for. Doesn’t seem like a hard thing to do. Plus, I have like 150+ Play Coins just sitting there, collecting (3D)e-dust, waiting to be spent. Let’s keep this going, okay?