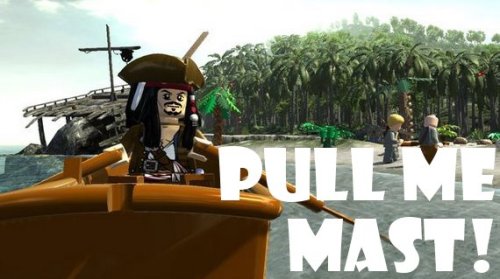 “A LEGO pirate’s life for me” would’ve made for a good post title. I’m just saying…

Traveller’s Tales has pretty much cemented their LEGO videogame formula, and it seems like they like what they have in the blueprints and are probably not going to stray from it too much. This is both good and bad. The good comes from the aspect that, nine times out of ten, the formula is fun and silly and an OCD gamer’s utopia, with a billion different things to collect and tasks to complete. The bad is that if you’ve played one LEGO videogame, you’ve played every LEGO videogame, whether it came out today or five years back.

LEGO Pirates doesn’t do anything new or shiny, but it is probably the second most appropriate franchise for LEGO-izing next to Star Wars because the Pirates of the Caribbean films are fun, light-hearted, goofy, epic, and made up of a variety of wild locations. Plus, there’s the character of Jack Sparrow, a man that sways and sways your attention towards him immediately; I still can’t believe how perfectly they nailed him and his persona in LEGO form, right down to the drunken swagger. It truly is a sight to see.

LEGO Pirates covers the main cinematic trilogy, as well as the newest film On Stranger Tides. The cutscenes do a great job of moving the plot along humorously, but a lot of giggles were lost on the fourth movie as I didn’t really understand what was happening and why; these games certainly do benefit from a gamer already knowing the tales in and out, allowing the jokes to resonate more without losing out on crucial plot details. Here’s my guess for the fourth film: Jack Sparrow doesn’t want to grow old so he’s off to find the Fountain of Youth. Blackbeard feels the same way. However, for the Fountain to work, they need to make mermaids cry or something. Then some stupid wannabe pirate girl gets stabbed, and we need to use the Fountain to heal her. Oh, and Captain Barbossa has a peg leg now. Maybe a mermaid ate it. The end.

As mentioned before, the gameplay remains the same. You play through a level by yourself or with a co-op partner, smashing everything in your path to collect studs and open new places to explore. Some new tricks include using Jack’s magical compass to find hidden treasures or looking through a telescope and tracking a certain someone as they move around. Other than that, the game is much more puzzle-heavy than combat-heavy, and sometimes the puzzles can be a little difficult to solve, especially when one requires you to have destroyed X over there to complete. I was particularly stuck on the final level of On Stranger Tides, mad to discover that all I was missing was pushing in a block that did not look, um, pushable. Grrr.

Strangely, I noticed that Traveller’s Tales did not include a level editor this time around, which previously showed up in LEGO Harry Potter, Years 1-4 and LEGO Indiana Jones 2. That’s fine. I only tinkered with it a few times and just didn’t find it too much fun, especially since there was no way to share levels online or download new ones. No big loss. I still think drop-in, drop-out co-op via online would be marvelous, as the screen splitting up is often headache-inducing.

If you’re not a fan of the LEGO videogames, this one won’t certainly convince you. However, if you do love collecting studs and building items from broken LEGO bits and listening to dozens of characters mumble their way through a scene or riding giant crabs, then you’ll love LEGO Pirates. There’s plenty to do, to see, to be, and if you love carrots you’ll be especially pleased to know that there’s a lot of carrot humor. Whatever that means.