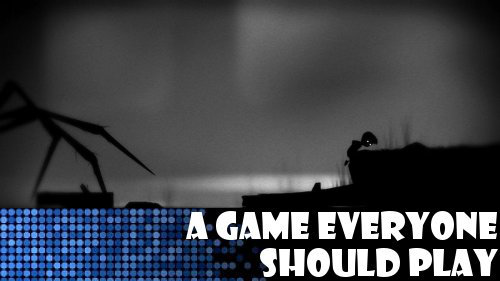 Yup, a game about a voiceless, little boy trapped between the world of the living and the world of the dead, which is filled with deadly traps, one friggin’ scary spider, and evil children ready to eviscerate him…yeah, that’s the game everyone should play. Limbo–fun for the whole family!

I won a free download of Limbo last summer and thoroughly enjoyed my time lingering in the space between. Because of its simple controls and lack of overbearing narrative and on-screen tutorials, it’s a game one has to experience, learn as they go, become one with, and for that I have a story, a story I meant to tell long ago, but never got to it.

After beating Limbo, I had my wife Tara play it. I told her very little about the game prior; I sat her down in front of the TV, turned the Xbox 360 on, handed her a controller, and took my spot on the floor next to her to watch. Just watch. I did not say a word. I did not answer any of her questions or react to anything she said. The game had started some minutes ago, but she wasn’t aware yet as she hadn’t touched a button. Once she did, the little boy’s eyes opened, and she started moving through the forest. She ran right into the first bear trap, destryong the little boy, yelping–just like I had my first time. Then she tried to jump over it, dying again. I remember her getting frustrated, because there was no way to jump over the bear trap given where it was placed and the angle of the landscape. Then she discovered that the little boy could push and pull items. Again, I’ve still not said a word at this point; it was thrilling to watch her learn how this world worked, how to manipulate the environment. And she was doing so well…

…until the spider showed up.

Once the spider was crawling after her, she began to panick. The littly boy rushed forward without care, stumbling over ledges, falling down into pits, all in the hope to avoid the spider. Now there was an urgency to everything. And it took her some time learn how to have the spider hurt itself via one of those beartraps, with a teeny bit of nudging from me. Again, there’s only so much you can do in-game thanks to its sparse controls, but thinking outside of the limbo-box is definitely required. When the spider grabbed the little boy and covered him in webbing, she believed she had died again, slowly putting the controller down; however, that was not the case. There was much giggling as the boy, bound and gagged even more than Frodo by Shelob in The Two Towers (the book, natch), hopped as fast as possible to anywhere but there.

Unfortunately for Limbo, once the spider and early forest scenarios are done, the game stops being something to experience and more like something to solve. Like, it becomes very obvious that you’re really playing a puzzle game by the time the boy leaves the forest instead of an adventure title. I showed Tara some of the later scenes via YouTube, and that had been enough. She had experienced Limbo, also known as Run From That Spider. There was no need to ruin that with frustrating puzzles that the majority of the gaming community had to look up online for solutions. Still, it’s a game everyone should play, especially just the first hour or so. With little music and cutscenes to distract, you’re quickly brought into the unsafe world and tasked with exploring, something everyone can connect with, something I know I loved doing as a young boy. Sure, it’s a depressing time, an untold story of siblings separated, but its uniqueness is more than worth the sorrow.

So…have you played Limbo yet?

I have a soft spot for Mega Man Legends, a PlayStation title that plays nothing like previous Mega Man games. Instead, it focused on open-world gameplay and character interaction, starring a teenage incarnation of Mega Man named Volnutt. It was also the very first wall-jump into 3D polygons for the franchise, making it a sharp slap in the face of any Mega Man fan ever. Thankfully, I was never diehard obsessed with the blue-armored boy’s adventures, and so when this released it just looked like a fun, light-hearted romp, something like Brave Fencer Musashi, with its bright colors and exuberant character personalities. The plot involved hidden treasure, pirates, and a lot of archeology. Very different from your standard travel left to right to end of level and beat boss, acquire its power, and find the next boss weak to it.

I never purchased Mega Man Legends, but somehow it ended up in my collection. If I close my eyes and think hard enough, I believe I borrowed the game from a friend–just the CD though, no jewel case or instruction booklet–and then never gave it back. Or maybe I did. I have these flashes of seeing the game recently amongst all my shtuff. Not sure if I could find it right now in my boxes and boxes of junk seeing as it’s just a little CD by itself, but I might still have it. Who knows. Either way, I played it, I liked it, and I’m pretty sure I never completed it.

All of this is just to say that Mega Man Legends 3–long desired, long hoped for by many–is in the works for the Nintendo 3DS, and with the launch of the system’s eShop in late May, Capcom is releasing something called Mega Man Legends 3: Prototype Version. It’s more than a demo, but less than a completed game. Once you finish the core missions, you’ll receive access to areas of the game not yet finished and be able to play with a debug menu that gives you special moves and abilities. Capcom is hoping for a lot of feedback from gamers about it because without any interest, the title itself might just get chucked into the trashbin. Eep! Be a good Servbot and provide feedback here: http://www.capcom-unity.com/devroom.

Oh, and here’s a little looksie at what’s to come:

Still not sure if this is a free eShop download or a paid demo, but so long as it isn’t too pricey, I’ll be getting it. Five dollars sounds right, but I’m sure Nintendo is going to screw us all and use some wonky points system so it’ll be more like 500 3D Space Bucks. It’ll be nice to have some games to play on my 3DS that don’t require me to move around a room like a goofball (Face Raiders) or have an extra item available at all times to play ’em (AR cards). I can only make so many different Miis before I get bored. Come on, late May…hurry up and get here ASAP.