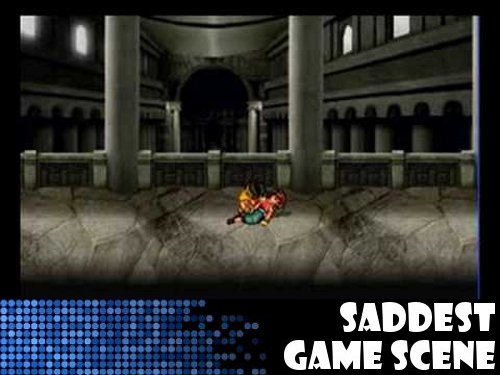 I’ve been struggling with this topic from the 30 Days of Gaming meme for a bit, and I didn’t want to just cop out and say that, obviously, the saddest moment in gaming for me is when my absolute favorite character unfairly sacrifices himself for the greater good. I already wrote about that. So I had to think, think, think, and all I kept hearing inside my head was a cold, solid thud. Over and over. Thud. It wasn’t inspiration falling down, giving up, calling it quits, ready to rest in eternal darkness; it was Nanami.

Suikoden was all about politics and war. Suikoden II threw a third ingredient into the mix, a healthy dose of friendship. This showed up in the form of the main character and Jowy, as well as the main character and his adopted sister Nanami, a fiesty, good-hearted girl that more than often spoke on his behalf. She’s a worry-wart, caring deeply for everyone she comes in contact with, as well as a highly trained martial artist; later on in the game, when she learns that her brother and Jowy are both commanding opposing armies, she pleads with them not to fight. However, love keeps her around, keeps her by her brother’s side, all the way to the end when, in Rockaxe Castle, she falls trying to protect those she cares about from being ambushed.

You can hear the horrible noise at 1:30 of this video:

And the part that makes it so sad is just how sudden it happens. Nanami skillfully deflects every arrow but one, and then she’s down for the count. No stagger, no moment of shock–just a body giving away. There isn’t even time to comprehend what happened because Gorudo and his men shout “BOSS BATTLE!” and away you go, desperate to get back to your big sister, to try and save her. Which doesn’t happen.

It really doesn’t take long in Suikoden II to forgot that the main character and Nanami are not related to each other. Some of her last words touch on this, how she was so happy to have a family. To even be Jowy’s friend.

Just like with Gremio, Nanami can be saved. However, it’s a little more complicated than simply collecting all 108 Stars of Destiny so I’ve never seen it accomplished. And never will. Nanami has always–and will always–end with a spiritless thud.