Chomping and wall-jumping my way to fun in Monster Tale 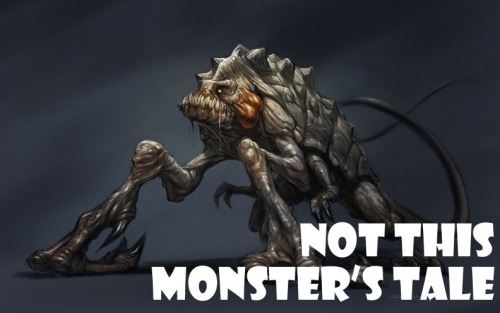 My current stats for Monster Tale say that I’ve now played the game for three hours and five minutes, clearing 28.4% of everything. I think this is an excellent stopping point to hand out some free impressions about Ellie’s journey into the unknown. To start—it’s super fun. The story is light and bouncy, and kind of reminds me of a Saturday morning cartoon plotline: a bunch of kids leave home to become rulers of a foreign realm where they also enslave monsters to do their evil work. Enter Ellie, a young, spritely girl who stumbles upon a magical band (the thing you wear on your arm, not the thing you pay too much to see perform badly live) and an egg which hatches into a powerful monster. Jealous of her connection to Chomp, these unmanaged kids seek to steal back what they believe is rightfully theirs.

Much like how Shadow Complex was done in honor of Super Metroid, Monster Tale feels to be honoring the same game, as well as the Castlevania titles for the Nintendo DS. The overall aesthetic is friendly, with bright colors and cuddly enemy lifeforms, and I simply love that the save rooms are in libraries, and that to save you press up on the D-pad. It feels so good to save. Ellie can use either a melee attack or shoot balls of energy from her band; I’ve found that melee is most often the way to go, and the better your combo for killing, the greater your monetary reward is. Or sometimes you’ll get a slice of cold pizza. Win-win, really.

The platforming…it’s solid, but a little slow to start with. Thank goodness for the wall-jump ability, which makes backtracking and traveling in general smoother. You travel left and right, up and down, and there’s definitely obvious sections that will be accessed later after you’ve acquired the right ability. The usual platforming pitfalls prevail, too, with ledges that vanish upon touch, ones that bounce her high into the air, and others that move back and forth.

Chomp’s a nice addition to the party. He mostly attacks enemies on the top DS screen, and regains health on the bottom one, as well as devours food, kicks soccer balls, and learns new skills. The eating animations for him are made of pure smiles. So far, he’s learned several forms to evolve into, and the one I’m currently upgrading is called Wrecker, which means he enjoys exploding, meat, and exercise. That might sound silly until I tell you that his previous form loved ice cream. And here’s where it gets really RPG-like; each Chomp form levels up on its own, gaining stats from whatever you have him eat or how he attacks enemies; players can switch between forms on the fly, too, without the fear of losing all that hard-earned experience.

My only irks so far is that, on occasion, Ellie will roll forward when I actually want her to jump down to the ledge below. Also, the noise that plays when text scrolls along—does that have a name?—is annoying and not needed. Remember, silence is golden.

Boss battles are good, but I’m worried they are all gonna be too much alike, wherein Ellie fights one of the kids and a monster they control. Doesn’t take long to learn the patterns, and the toughest parts is just keeping Ellie’s health up as there’s no way to replenish it during a battle sequence. Regardless, I’m looking forward to giving Priscilla a smackdown. She reminds me of Darla Dimple from that 1997 classic Cats Don’t Dance.

But yeah, almost one-third of my way through Monster Tale and loving it immensely. It’s definitely proof that this pre-3DS system still has a lot to say. Stay tuned for more coverage.