Radiant Historia and history as it should be 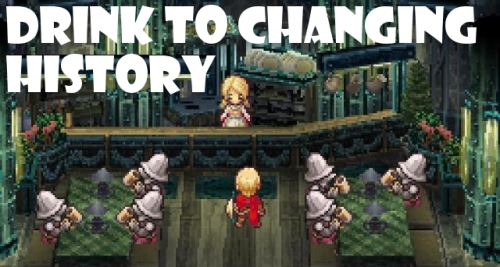 According to the GameStop guy, I was the fourth person to pick up a copy of Radiant Historia yesterday. I should’ve asked him how many fratheads came in for their copy of Bulletstorm, but I forgot. Either way, it’s safe to say that this new RPG from Atlus is either going to sell slow, but steadily or fall victim to being too niche for the industry to pay attention to. I mean, my local GameStop didn’t even have boxes out for it yet under the NEW RELEASES section. Good thing I pre-ordered it.

Greg Noe wrote about the game’s first hour, and I’ve played all that and 30 minutes more at this point. Nations are at war, and the world is in clear danger of being turned into a desert. Two time- and space-bending figures, Teo and Lippti, attempt to try again to save it all by putting history’s chances on a soldier named Stocke. Last night, after saving an allied spy, Stocke had to make his first crucial decision, and I’m curious to see how it’ll play out. If it doesn’t go well, that’s okay. The great thing about wielding the White Chronicle is that Stocke has the ability to travel back in time to key events and try things differently.

The first sixty minutes of the game, the time that encompasses the Prologue, is very tutorial, which isn’t a horrible thing, but I am eager to get out there on my own and figure stuff out as I go. A good portion of Radiant Historia‘s beginning is spent talking and pondering, and thankfully the story and writing is strong. Heck, one of the villians even used the word cacophonous, warming the fire burning deeply in my heart. It is also quite refreshing to see a protagonist that is not silent, that is more like Mass Effect‘s Shepard, that is not a bumbling idiot led by his partymates, but rather a leader, a decision-maker.

However, not all is perfect. The sound of Stocke’s footsteps begins to grate, the overuse of cliche JRPG bubble emoticons, and for some reason I find Stocke getting stuck in the strangest of places when running around. Like against NPCs or behind a treasure chest. Something about the collision detection is off. Minor stuff, but irky stuff nonetheless.

Still, the story and battle system have their hooks in me already. I want to desperately know what happens when I side with character X over character Y, and even though the game’s opening only had a few fights to it I can clearly see them really becoming headscratchers. These are not fights one can simply auto-battle their way through. Turn order is vital. Planning and precision are also equally important. That’s like the total opposite of Dragon Quest IX (post-game currently) where all I do in that one is run around, spam the attack button, gain experience and coins, and do it all again–all while watching an episode of The Office or something.