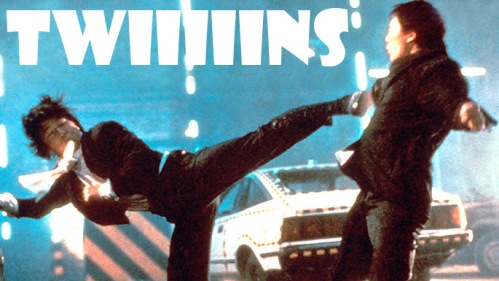 And over the weekend, Tara and I took down two of ’em, at the same time, thus earning ourselves the following Achievement from Scott Pilgrim VS. The World: The Game:

To be honest, it happened too fast and too easily. I mean, we had so much trouble staying alive against Todd and Roxie; I figured the Twins were gonna be a handful of ass-whoopin’, but no. I got both of them cornered up in the top left part of the screen and slashed away with a stolen ninja sword while Tara took care of any nearby goons. Within seconds, one of the Twins was flashing yellow, an indication of his low health, and then boom–KO!!! Both dead. Both within milliseconds of each other. I really thought killing two bosses at the exact same time would’ve been tougher than that, but it was almost mindless how it went down.

Here’s hoping NegaScott or Gideon toss up a better challenge. Granted, there’s no Achievements tied to them so all Tara and I need to worry about is staying alive. I’ve hit the level cap with Scott, but she’s still climbing the experience ladder with Kim. I have to wonder if maybe I was a bit overpowered for the Twins? I doubt that though because just the level’s regular enemies put up one stink of a fight. Hmm. Can’t wait for the DLC and patch to help balance out the difficulty issues. Still need to get online access though…

This entry was posted in achievements, entertainment, musings, videogames, xbox 360 and tagged gamerscore, Scott Pilgrim, Scott Pilgrim Vs. The World, The Twins. Bookmark the permalink.