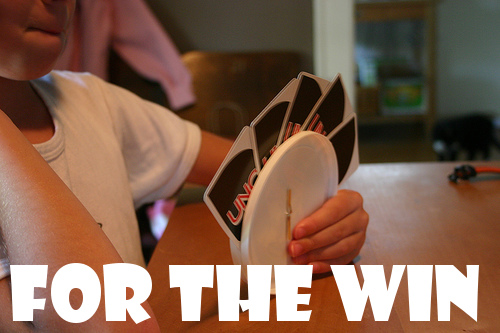 So…full Gamerscore earned for UNO; all 12 Achievements pinged and proudly captured; blah blah blah yadda ya I’m the man blah blah. It happened last night, and I slept quite soundly thanks to it. I polished off a few more rounds of online multiplayer, thus securing the final Achievement and telling the world that, yes, I am a UNO shark. Feels good to finally have another game fully completed that isn’t LEGO-based.

Anyways, reviewing the list of Achievements, it’s clear this isn’t exactly a tough 200 to get. Most just come naturally with time, and the ones that took the longest for me involved playing online games…because I was a Silver member of Xbox Live for a great while.

Skipping an opponent is a lot of fun. I enjoy it more than Reversing or even making them Draw 4 and lose a turn. Skipping just has this quick satisfaction to it, and I love the Achievement’s artwork. Makes me want to throw some rocks across a lake now.

This is basically how you win a game…though I guess you could win without calling UNO! but that might get you in trouble with other opponents, forcing you to draw two more cards. Best to just call it and then seal the deal.

It’s the last one I got. Some nights, I’d play two to three games and not win a single one. This is because some people like to play up to 250 points, which is not easy to win in one fell swoop. Other times, I’d be in a game where the first person to go out wins, and that made things easier. Either way, this one required patience and a lot of diligence.

Yay…full Gamerscore! UNO! It excites me to now see a new entry on my Xbox Live dashboard under the fully completed titles section. Maybe I should try to finish up Shadow Complex next, since that’s the closest. Or Winterbottom. One of those. We’ll see. So much more games to play, so little time and sanity left.