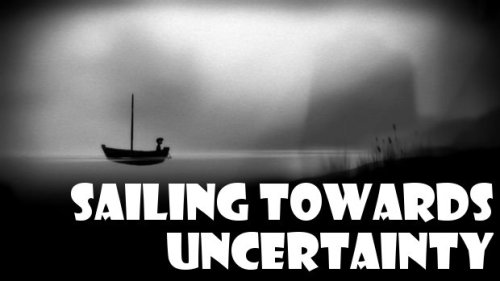 That’s both a funny, commonplace phrase for us Catholics, as well as my current state of progress within the XBLA downloadable platformer of the same name. I won a free copy of it yesterday and was very excited to sit down and play before going to bed. However, maybe playing this kind of game before bed isn’t the best idea; it’s depressing and dark, hollow and haunting, a sick trip into the unsafe bowels of somewhere, and the only way to get that creepy spider out of my brain was to wash this experience down with some light-hearted UNO afterwards.

I won two games, and lost the third to some twittery brat…if you were curious.

Right. So, Limbo. It’s beyond creepy, and it sucks you right in, and before you know it, you’re walking through a soundless world, unsure of what’s next, falling into bear traps and pitfalls and the clutches of one particularly evil spider. It looks fantastic and mesmerizing; however, all previous complaints about the lack of storytelling ring true. I ended up staring at the opening screen for a good five minutes before I realized, oh, hey, I’m in control of the character now. But why am I in control of the silhouette boy with white eyes? ::shrugs:: A glimpse at the description box from the download menu clues me in that I’m searching for my lost sister, but the game itself tells us nothing.

I have to believe though that the game’s developers are fans of I Wanna be the Guy, a game that is as masochistic as it gets. In IWBTG, players meet untimely–and timely–deaths just by doing as they’ve been trained to do for years. They will jump from platform to platform only to get destroyed by a falling block of spikes that falls the moment you land on the platform. The game is designed to mess with our heads, as well as undo everything we’ve ever learned about the platformer genre. Limbo is cut from the same cloth, and you’ll have to die to figure out how to survive the harsh underworld and all its peril. Which breaks my heart because there’s an Achievement tied to beating the game in one sitting with five or less deaths; I stopped counting around death #20, and so I must just give up all hope on ever getting that one. I hate death-themed Achievements, remember? Other Achievements seem to rely on the main character finding eggs and then breaking them. Here’s the two I got so far:

Altitude is attitude (5G): Exploration off the ground

No real explanation for this egg thingy, but if I was to speculate, it’d have something to do with a giant chicken kidnapping his sister and this is his bit-by-bit revenge plan. Again, you kind of have no story here so it’s free game to make it all up yourself.

I probably played for a little over an hour last night, and ended up getting stuck at one part. There’s a worm that drops onto your head and messes up how you steer the boy, and I can’t for the life of me figure out how to get rid of it; the mind-controlling parasite keeps walking me straight into a death-pit. Will have to give it some time, as I’m sure the answer is right there before me. Trial and error is your best guide.

Either way, it’s hard not to love Limbo for its art style alone. The stark blacks and whites–and soft, misty grays in the background–really bring about an atmosphere unlike any other game. Sure, it’s depressing as all gets, and the lack of music might drive some gamers nuts, but I found myself really immersed. Especially when some items in the foreground block your vision of the boy; I will actually lean forward in my chair, trying to get a better view, as if that’s even possible.

Alas, I won’t be able to play again until the end of the weekend.