Earlier in the week, Pokemon fans got teased with the following silhouettes, which represent the three new starters from the forthcoming Pokemon Black/White games:

Many guessed that, seeing as there’s been little innovation in this aspect, the three Pokemon would fall under the usual category of being fire-based, grass-based, and water-based. Sure, some hoped for new elemental types to start out their next adventure. Personally, a baby dragon-based Pokemon would be killer to train from the get-go, but alas, it’s been revealed what they look like, knocking down all theoretical walls and solidifying that they are what they are, which is adorable/freaky and just more of the same: 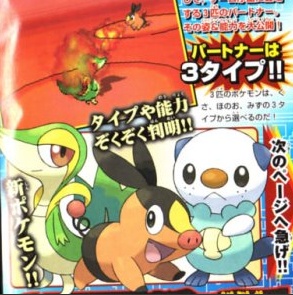 We have a fire-based pig, a rather stoned-looking grass Pokemon (inside joke?), and some kind of…demented beaver? Really, your guess is as good as mine. Their Japanese names are reportedly Tsutaja, Pokabu, and Mijumaru, but I’m sure they’ll swiftly be made into something more punny for us silly Americans. Either way, I’m not overly excited for Pokemon Black/White. See, HeartGold will definitely be keeping me busy for a long, long time, and if there’s a severe lack of innovation in this next iteration of the series and just, oh, a hundred more Pokemon to ultimately collect then there’s no reason to jump on it. Chances are I won’t even have half of HeartGold‘s Pokedex filled by the time this comes out. And I really do think the series needs more than a graphic overhaul to spice things up.

If I had to pick one though, I’d go with the fire-based pig. Naturally, his nickname would be Bacon.

There are some who call me…Ding! Expert

Been taking care of business in Borderlands as of late. And by that I mean…uh, shooting things in the face, grabbing a variety of loot, and leveling up. My soldier character is now an assault rifle-wielding LV. 21 maniac. He also enjoys watching daytime soap operas and Pandora sunsets. Don’t judge him so quickly just because he likes to yell things like “Critical, bitch!” and “Critical, biatch!” when scoring a critical hit. He’s actually a teddy bear.

Anyways, at this point, I’ve now taken down Sledge and unlocked fast travel. Thank the mighty stars on that latter account. I really hate driving in the game, and walking some of these distances to and fro is just not feasible. So yeah, fast travel. Woo. At least this time it was earned ::cough cough Elder Scrolls IV: Oblivion cough:: and now I can head back to the Arid Badlands to finish up some other sidequests before getting deeper into the story. If there is a story. Oh snap.

I unlocked five Achievements last night, but here’s the ones I liked the most out of ’em:

12 Days of Pandora (30G): Mastered the technology of Pandora

There are some who call me…Time (25G): Equipped a class mod for your character

That 12 Days of Pandora Achievement is a bit random, but that’s okay. Basically, you had to kill a bunch of enemies in a number of different fashions, and when I checked on it’s status it said I only needed to melt one more face to get it. So I switched out my self-healing grenades with a corrosive mod and chucked a few into a group bandits. They were puddles of goo before they even knew I was there. Muhahaha. Ahem.

Borderlands really does take some levels to get going. It definitely becomes much more fun when you’ve increased your inventory a bit, opened up your character’s action skill, and found some weapons you really like. However, as I’m still playing it solo, there’s been a bunch of opportunities that are clearly better suited for a co-op game, such as the boss battle with Sledge. It’s a bit lonely on Pandora. Maybe I can convince Tara to play some split-screen co-op with me…