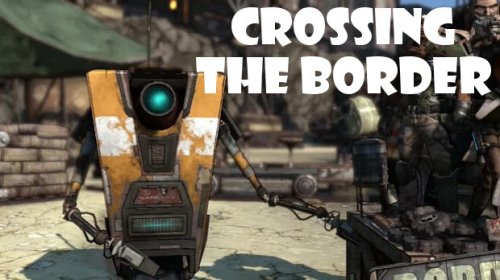 After a short and lighthearted cutscene, Borderlands is off and running, having you pick your character class. There’s four of ’em, and each relates to typical archetypes a la Diablo II such as the assassin and rogue and tank. I, however, decided to pick Roland, the Soldier class. This is rather surprising and I’ll tell you why: I’m always, hands-down, 100% of the time attracted to stealthy characters. In BioShock, I quickly fell in love and never let go of the plasmid that turns you invisible when standing still. Also, in Fallout 3, one of the first things I did on my very first playthrough was acquire the ninja assassin suit that, more or less, turns you completely invisible. In Metal Gear Solid 3: Snake Eater, I would literally hide in the grass for up to twenty minutes, making sure I got enemy movement patterns down and taking extreme caution in every move I made. The boss battle against The End was simply a bowl full of sushi with extra bliss sauce on top.

Case in point: I like taking my time in a gunfight and planning accordingly so as to not ever actually engage with the enemy, but simply take it down hard and fast from a distance. You’d think then that I’d have picked the Siren, a woman all about sniper rifles and phasing in and out the world. But no, I went for the Soldier. Wanted to try playing a game differently for once, and I’m really pleased so far with how it’s turned out.

So, the first chunk of missions are more or less a tutorial, but they do well to teach you the mechanics of the game, and pretty soon the fights begin to intensify, the loot becomes better and plentiful, and the quest log starts to fill up. I played for about two hours last night, got up to level 7, and finished off the first boss, Nine-Toes (also, he has had three balls).

I think the game looks amazing. Rarely has a cel-shaded game ever let me down, and the way the background blurs as you zoom in with your fire-starting pistol is a beautiful touch. The thick outlines and bright character colors contrasting with the drab Fallout 3-like setting make for an eye-grabbing mix. The draw distance isn’t terribly great though like in the newest Prince of Persia where you can see far and wide and it all looks rock solid. And the menu presentation is slick and easy to navigate, which is pretty crucial when it’s all about looting.

My only hesitation so far is in figuring out which weapon is better, and whether or not I should hold on to it or sell it for money. Here’s a helpful tweet tip from fellow Borderlander Greg Noe: It’s good to know about weapon rareness: white > green > blue > purple > orange

Other than that, I just got to the point where I’ve taken on multiple quests at once and have the freedom to explore them at will. Love the challenge log, too, which are like mini Achievements that give you tasks and reward you with experience points. Makes sense to me. Anyways, can’t wait to head back to Pandora tonight!

One response to “FIRST IMPRESSIONS: Borderlands”