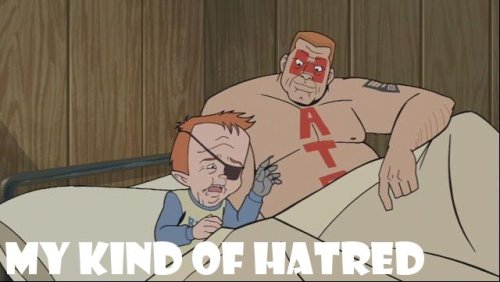 Over at BitMob, folks are talking about great games that they hated.

In general, I only play games I suspect I’ll like or love. On occasion, there’ll be a game that disappoints me, but hate is such a strong word. I mean, I hate global suffering and depression and money woes and the looks puppy dogs give you when you walk by their glass prisons in the mall…but a videogame? Chances are, I’d only hate a videogame if I spent $60 on it and it took my soul and shat on it. But, as previously mentioned, I only go after games that I will probably enjoy.

That said, here’s some “great games” that I found to miss the mark.

For sandbox value, the GTA series is fine. Amazingly fine. Ever want to do 70 mph down the sidewalk? Go for it. Where I felt short-changed, however, was in every single mission, and more specifically, the clunkiest and most unforgiving boat races ever to grace an ocean’s tide. Not only did these repeat themselves, but controlling boats and cars was always way too slippery for me.

Savage. Sums up Contra well, I think, and I grew up playing this game at a friend’s house during a time when neither of us knew about the extra lives code. We’d run, we’d shoot, we’d die by the end of the first level, and then we’d go outside to ride bikes.

Button-mash here, button-mash there, button-mash everywhere. Don’t even try to form a strategy. Just hit those buttons and stare in wonder at how a Pokemon is kicking the crap out of Donkey Kong. I don’t know. I know folks love this series, but it never resonated like other fighting games did.

The same reason I didn’t like the Bayonetta demo or Super Smash Bros. Brawl: mashed potatoes. Er, I mean…mashed buttons. Frenetic gameplay, bad camera angles, and room after room of enemies just didn’t make for a fun time. I dug the gothic style, but ultimately gave up on this hack-n-slash pretty early.

There’s a lot to like about Mass Effect; conversely, there’s a lot to dislike. Let’s start with the positives: the world, the lore, the voice-acting, the alien design, many of the combat scenarios, which can be both tense and exhilarating. Now the bad: elevator rides, a horrible inventory system, the constant loading of textures, the way faces look like they’ve been punched one too many times, and driving that car-tank with buttered wheels from place to place. I’m looking forward to reviews of Mass Effect 2 to see if some of these problems were addressed.

Again, these aren’t really games that I hate, but they just didn’t do it for me like they seemed to do for others.

What about you, silent reader? Got a supposedly great game to hate? Hmm? Speak up!