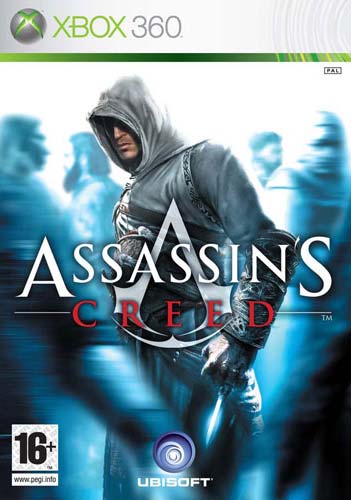 The Basics
You are Desmond Miles, a bartender kidnapped for his memories. Conversely, you are also Altaïr, an assassin stripped of his rank and forced to earn his place back in the cool club by eliminating a number of targets that are somehow involved in the same plot to obtain a “piece of Eden.” It’s all very mysterious stuff, and you basically just told what you’re told (“Go to sleep, Mr. Miles!”) until you can begin to piece things together for yourself.

The Good
The graphics, namely those of the cities you’ll visit and explore, are simply stunning. The cities and their streets and their rooftops and shadows and little dirt-covered crevices—they all just look absolutely gorgeous. People walk through the street with lifelike fluidity, and the small sounds of chatter or a pot breaking really do add to the world.

Free running is a blast, and it works out well just about 90% of the time. Once the guards knock you down and have you surrounded, there’s really no chance of escaping without doing some good ol’ sword-swinging.

The combat system (at times) is fun. You have a variety of options: take guards out ahead of time with throwing knives, do a low-profile kill with your hidden blade, or duel it out with swords, countering as you go. This, however, is not button-mashing combat, and if one isn’t careful with their timing, they can find themselves getting slaughtered easily. But once you find your rhythm, taking out an entire circle of city guards is both exhilarating and nerve-wrecking.

The Bad
Unfortunately, Assassin’s Creed is a lot like the directions for shampoo. Once the game gets going, you are sent to one of the main cities—Jerusalem, Acre, or Damascus. After sneaking inside, Altaïr must find the local assassin bureau where he’ll get his first clues about the mission. After that, there’s some eavesdropping, integrating, and pick-pocketing…once enough of these side missions have been done, Altaïr is then given the option to terminate the latest target. Kill him, and head back to Masyaf for some talking until you are thrust back to another of the Holy Land’s cities. And that’s it.

The Fugly
It’s annoying to have to do the same thing over and over again; it’s even more annoying when the said same thing offers you nothing new. I saved every single citizen being bullied by city guards, and about 50% of them told me they’d run right home and the other 50% said that all the city would know of my good deeds. Neither of these claims really solidified. What would’ve been nice is if my actions led to something. For instance, maybe extra guards get posted in areas where I saved someone, or a single citizen (maybe the saved citizen’s brother?) would help me in a fight or something like that.

Speaking of worthless, there’s the flags. Fun to stumble upon, a pain to fully track down, and they exist only for Achievements-sake. Again, if they did something for Altaïr (like letting him run faster or fall from greater heights) then they’d serve a point. Alas, they do not.

Lastly, there’s the “ending” to talk about…what a disappointment. I was just as dumbfounded as Miles was after seeing that weird vision and writing on his bedroom’s walls. Granted, Altaïr’s storyline came to a sound and understandable conclusion—why couldn’t Miles? After the credits roll, we’re given control again and can wander around his confined cell for clues, but there’s really nothing else there. A shame, as I wasn’t even sure if the game was over at that point, but I guess it was…

The Overall Vibe
Assassin’s Creed is a game that should be played though not entirely to its end. Visiting your first city and running along a stream of rooftops is a sure-fire blast, but once you beginning to see the game as nothing more than the same ol’, same ol’ it loses its charm fast. There are some great moments here, but it takes a bit of grinding to get to them. The “ending” is a complete letdown, nothing more than a lure for those hungry for Assassin’s Creed II.